Bangkok, or ‘Krung Thep’ (‘City of Angels’) as the city is called by the Thai, is the capital of Thailand.The city occupies almost 1,600 square kilometers and with more than 8 million (registered) inhabitants it is also the largest city of Thailand.

A city known for its rich cultural landmarks like the Grand Palace & Wat Phra Kaew, Wat Pho with the huge reclining Buddha, Wat Arun (Temple of Dawn) on the banks of the Chao Phraya river and its many charming neighborhoods such as Chinatown and Dusit.

It was 1995 when I arrived for the first time in Thailand and I was impressed by the vibrant Thai capital.
In late 1996, I made the decision to try my luck and moved from The Hague (The Netherlands) to Bangkok to further develop my career in the textile industry.

After some years it went worse with the Thai economy (Asian Crisis) and I struggled to keep working. Eventually I came in contact with the tourism industry and began working as a freelance tour guide in Thailand for Dutch tour operators.

In 2003 I started exploring the area where I lived on my bike, which I had brought from the Netherlands. I was totally fascinated by the many narrow alleys which were not mentioned on any map, the kilometers of trails along canals, the homes of the locals where you almost ride through and the presence of a very green ‘jungle’ so close to the busy city.

Cycling through Bangkok was something nobody could imagine. Bangkok, mother of all traffic jams, the largest 24-hour BBQ, smelly and slow moving traffic… Cycling is probably the last thing that comes to mind when thinking about Bangkok!

With the motto: “Who has not cycled through Bangkok, has not yet seen Bangkok”, Recreational Bangkok Biking started operating.

As of April 2004, Recreational Bangkok Biking shows tourists, expats and other interested people the hidden places in Bangkok.

We are therefore quite proud that we, as one of the first pioneers regarding ‘cycling through Bangkok’ have developed a successful formula and we can thus call ourselves ‘trendsetter in bicycle tours’.

We started with ‘Colors of Bangkok’, the first bicycle adventure through Bangkok and still one of our most popular excursions, but nowadays we have an extensive range of amazing bicycle tours.
There is a suitable tour for everyone, whether you are traveling alone or as a family with children.

For now I wish you a lot of fun preparing your Thailand trip and I am looking forward to have you on one of our bicycle tours!

“Bangkok City Culture” is a gentle ride of 3 hours through
the heart of Bangkok’s business-districts and of course we managed to set out a routing that avoids most of the traffic. 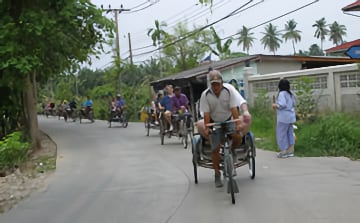 Rickshaw & Hike the Colors of Bangkok 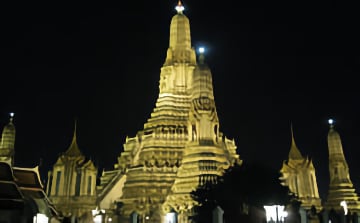 “Bangkok Sunset Ride” is a very gentle 4-4,5 hours culinary and cultural bicycle ride through Bangkok’s Thonburi side.
Discover the beauty of Bangkok by night during this amazing bike adventure! 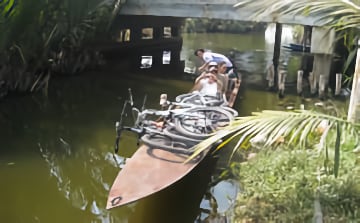 Our full day Bangkok Paradise tour brings you to an undiscovered and unseen part of Bangkok, even for local people.
Experience the real Bangkok, far away from the crowded tourist areas!

Secrets of Siam is a two day boat & bike tour. During the excursion participants see an abundance of nature and we bring you to places seldom visited by tourists.

Other cities in our network